Genetic Evidence shows Population Mixture in India
India experienced a demographic transformation several thousand years ago, from a region in which mixture between highly different populations was common to one in which mixture even between closely related groups became rare. The finding, which will be published online on Aug. 8, 2013, in the American Journal of Human Genetics, published by Cell Press, provides new information about the peopling of India and improves our understanding of the changes that led to the present-day structure of Indian populations [Credit: AJHG, Moorjani et al.] The findings, published August 8 in the American Journal of Human Genetics, describe how India transformed from a country where mixture between different populations was rampant to one where endogamy—that is, marrying within the local community and a key attribute of the caste system—became the norm.    “Only a few thousand years ago, the Indian population structure was vastly different from today,” said co–senior author David Reich, professor of genetics at Harvard Medical School. “The caste system has been around for a long time, but not forever.” In 2009, Reich and colleagues published a paper based on an analysis of 25 different Indian population groups. The paper described how all populations in India show evidence of a genetic mixture of two ancestral groups: Ancestral North Indians (ANI), who are related to Central Asians, Middle Easterners, Caucasians, and Europeans; and Ancestral South Indians (ASI), who are primarily from the subcontinent. However, the researchers wanted to glean clearer data as to when in history such admixture occurred. For this, the international research team broadened their study pool from 25 to 73 Indian groups. The researchers took advantage of the fact that the genomes of Indian people are a mosaic of chromosomal segments of ANI and ASI descent. Originally when the ANI and ASI populations mixed, these segments would have been extremely long, extending the entire lengths of chromosomes. However, after mixture these segments would have broken up at one or two places per chromosome, per generation, recombining the maternal and paternal genetic material that occurs during the production of egg and sperm. By measuring the lengths of the segments of ANI and ASI ancestry in Indian genomes, the authors were thus able to obtain precise estimates of the age of population mixture, which they infer varied about 1,900 to 4,200 years, depending on the population analyzed. While the findings show that no groups in India are free of such mixture, the researchers did identify a geographic element. “Groups in the north tend to have more recent dates and southern groups have older dates,” said co-first author Priya Moorjani, a graduate student in Reich’s lab at Harvard Medical School. “This is likely because the northern groups have multiple mixtures.” “This genetic datatells us a three-part cultural and historical story,” said Reich, who is also an associate member of the Broad Institute. “Prior to about 4000 years ago there was no mixture. After that, widespread mixture affected almost every group in India, even the most isolated tribal groups. And finally, endogamy set in and froze everything in place.” “The fact that every population in India evolved from randomly mixed populations suggests that social classifications like the caste system are not likely to have existed in the same way before the mixture,” said co–senior author Lalji Singh, currently of Banaras Hindu University, in Varanasi, India, and formerly of the CSIR-Centre for Cellular and Molecular Biology. “Thus, the present-day structure of the caste system came into being only relatively recently in Indian history.”* But once established, the caste system became genetically effective, the researchers observed. Mixture across groups became very rare. “An important consequence of these results is that the high incidence of genetic and population-specific diseases that is characteristic of present-day India is likely to have increased only in the last few thousand years when groups in India started following strict endogamous marriage,” said co–first author Kumarasamy Thangaraj, of the CSIR-Centre for Cellular and Molecular Biology, Hyderabad, India. Mohan Rao, Director, CSIR-CCMB said, “CCMB's continuing efforts over a decade on this field had helped in understanding the complexity of Indian population history and social structure, such as caste systems.” Author: David Cameron | Source: Harvard Medical School [August 08, 2013]
http://archaeologynewsnetwork.blogspot.com/2013/08/genetic-evidence-shows-recent.html#.Vqgr-ku9hFy


Back to the Aryan Man 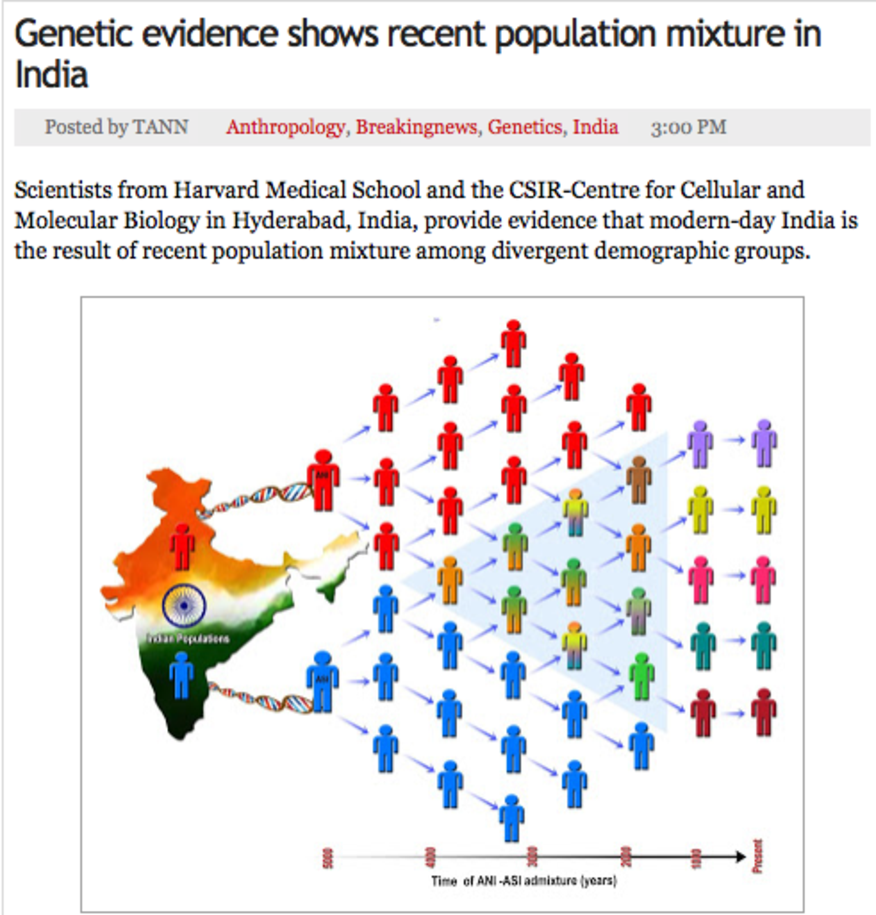