​Queen Nereftiti, the mother of the white King Tutankhamun the boy-pharaoh has been found in a chamber in the King's grave!
In 2010, geneticists used DNA tests to examine the parentage of Tutankhamun.
​
I introduce Queen Nerfertiti who was of white descent. 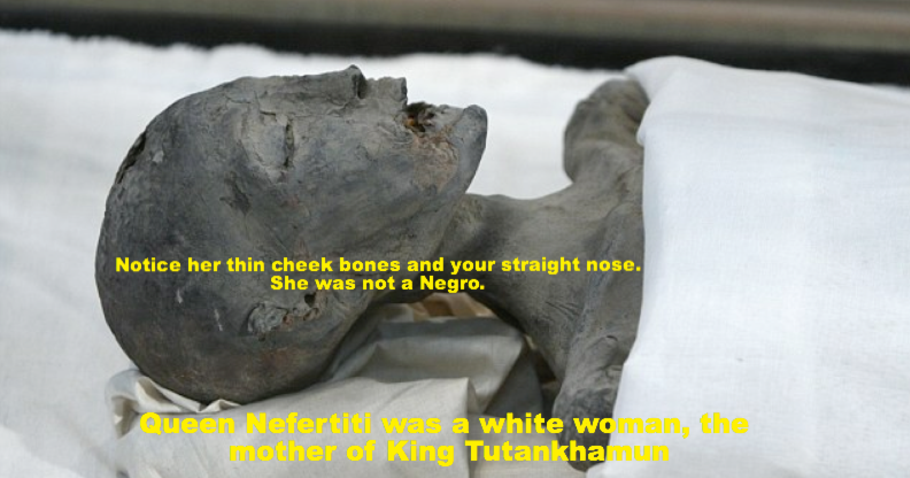 Previous DNA analysis has suggested King Tutankhamun's mother may have been a mummy known as the Younger Lady, who is also thought to be his father's sister.

However, there are some Egyptologists who claim that it is actually Nefertiti, the chief wife of Pharaoh Akhenaten and mother to six of his children, who is Tutankhamun's mother.

Dr Nicholas Reeves, an English archaeologist at the University of Arizona, has now provided new evidence to support these claims in a report published by the Amarna Royal Tombs Project. 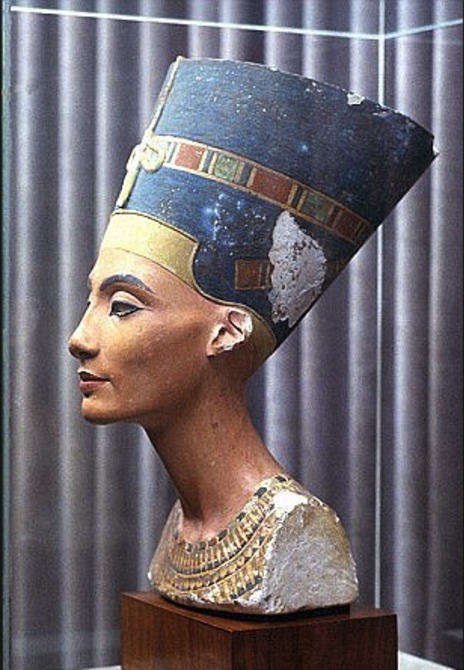 After analysing high-resolution scans of the walls of Tutankhamun's grave complex in the Valley of the Kings, Dr Reeves spotted what appeared to be a secret entrance.

He described how he uncovered the 'ghosts' of two portals that tomb builders blocked up, one of which is believed to be a storage room.

The other, on the north side of Tutankhamun's tomb, contains 'the undisturbed burial of the tomb's original owner - Nefertiti', Dr Reeves argued.

If Dr Reeves is correct, the hidden tomb could be far more magnificent than anything found in Tutankhamun's burial chamber.


She was the most beautiful queen ancient Egypt ever laid eyes on. She was the stepmother, and perhaps even the mother, of Tutankhamun, the boy-pharaoh of Egypt.

Still, today, the 3,300-year-old sculpture of her face, in the Neues Museum in Berlin, has the power to bewitch, with her almond eyes, high cheekbones and chiselled jaw.

Even her name, Nefertiti, is enchanting. Her full name, Neferneferuaten Nefertiti, means ‘Beautiful are the Beauties of Aten, the Beautiful One has come’. Her power and charms in 14th-century BC Egypt were so great that she collected a hatful of nicknames, too – from Lady Of All Women, to Great Of Praises, to Sweet Of Love.

Despite her epic beauty, she remained a model of fidelity to her husband, the Pharaoh Akhenaten. The same could not be said of Akhenaten, who had his wicked way with a series of royal escorts, including, some say, his own daughters.

Nefertiti was Egypt’s most influential, and most beautiful, queen, who ruled at the height of the country’s power, in the years of the late 18th Dynasty.

Yes, Cleopatra is more famous, but she ruled Egypt in its declining years, in the first century BC. After her death, Egypt became just another province of the Roman Empire.

Nefertiti lived during the richest period in ancient Egypt’s history – from around 1370BC to 1330BC, a time when Greece, let alone Rome, was centuries away from the peaks of its magnificent civilisation. As well as marrying a pharaoh, she was probably born the daughter of another pharaoh, as well as possibly ruling alongside Tutankhamun.

There is even a suggestion that she ruled Egypt alone after her husband’s death. So from cradle to grave she ruled the roost. Thus her other nicknames: Mistress of Upper and Lower Egypt, and Lady of The Two Lands.

Nefertiti and Akhenaten had six daughters, although it is thought that Tutankhamun was not her son. DNA analysis has indicated that Akhenaten fathered Tutankhamun with one of his own sisters – the first indication of his penchant for regal incest.

He is thought to have fathered another pharaoh with yet another wife, who is named in various inscriptions. The list of consorts didn’t end there. Among his other conquests are two noblewomen.

On top of that, it is even suggested that he slept with one of his six daughters. The jury is out on that one, although he probably did install one of them in the ceremonial – if not necessarily sexual – role of Great Royal Wife.

Despite all her husband’s rumoured lovers, Nefertiti’s name lives on as his loveliest, and most important, wife. Again and again, her beauty and power were depicted in temple images. Sometimes – like Prince Philip with the Queen – she is shown walking behind her husband. But she’s also often shown on her own, in positions of pharaoh-like power.

In one limestone sculpture at the Museum of Fine Arts in Boston, she is seen hitting a female enemy over the head on her royal barge.

She is power and beauty combined – Margaret Thatcher meets Princess Diana. In another sculpture, now in the Egyptian Museum in Berlin, her slim, lissom body is depicted in all its glory, leaving little to the imagination. Still, today, the bright red of her lips and the kohl-black edges of those almond eyes smoulder across the passage of a hundred generations.

Together, Akhenaten and Nefertiti blazed a trail across Egypt, building spectacular temples. In Karnak, the pharaoh erected one temple, the Mansion of the Benben, to his beloved, stunning wife.

But it wasn’t enough just to build temples. The royal couple’s devotion to the god Aten – representing the disc of the sun – was so great that they created a whole new capital in his honour at Amarna, a city on the banks of the Nile.

They built the new city from scratch, putting up two temples to Aten and a pair of royal palaces. It was like the Queen and Prince Philip deciding to up sticks from Windsor Castle tomorrow and building a new royal palace in the middle of Cumbria.

Here, too, in Amarna, images of the lovely Nefertiti abound, sporting her distinctive, tall crown. She and her pharaoh are also shown receiving great piles of jewels and gold from their subject people.

They ruled over a civilisation of astonishing sophistication. Among the discoveries are the Amarna Letters, more than 350 tablets excavated in the late 19th century, with 99 of them now in the British Museum. They tell the tale of a great nation with a highly developed diplomatic service. There are also rare chunks of poetry, parables and similes in the Amarna Letters. One striking line reads: ‘For the lack of a cultivator, my field is like a woman without a husband.’

Nefertiti is thought to have lost her own cultivator – her husband –around 1336BC; it is then she may have reigned over Egypt alone.

Her own death is shrouded in mystery. She is reckoned to have died about six years after her husband, possibly from the plague that struck Egypt at that time.

In 1331BC, Tutankhaten changed his name to Tutankhamun and moved the Egyptian capital to Thebes, where he died in 1323BC.

Today, Thebes is Luxor, home to the Valley of the Kings, burial place of Tutankhamun and, just possibly, Queen Nefertiti. So did she go back to Thebes with him – or did he take her body there? Or was she buried in the old capital of Amarna, where that marvellous bust of her was discovered in 1912?

For 3,300 years, the answer has been lost beneath the swirling sands of Egypt.
​ 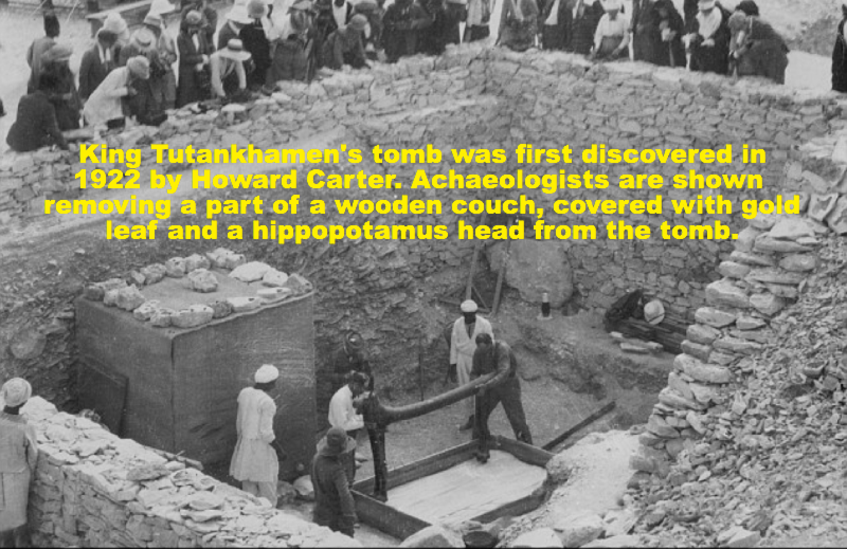 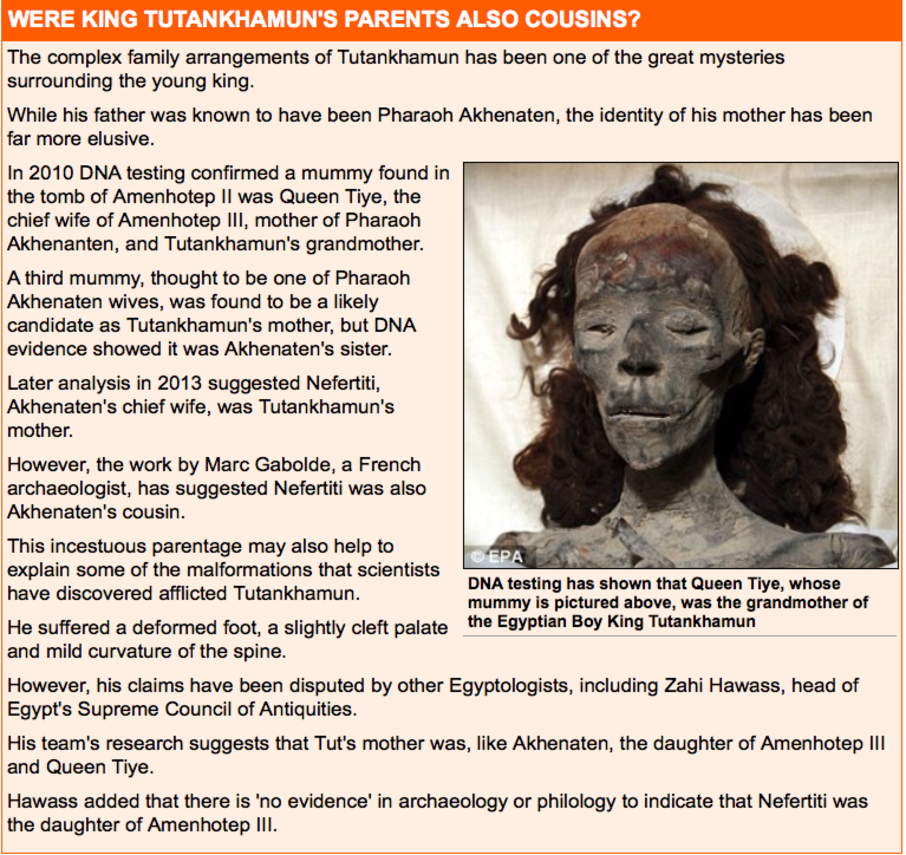 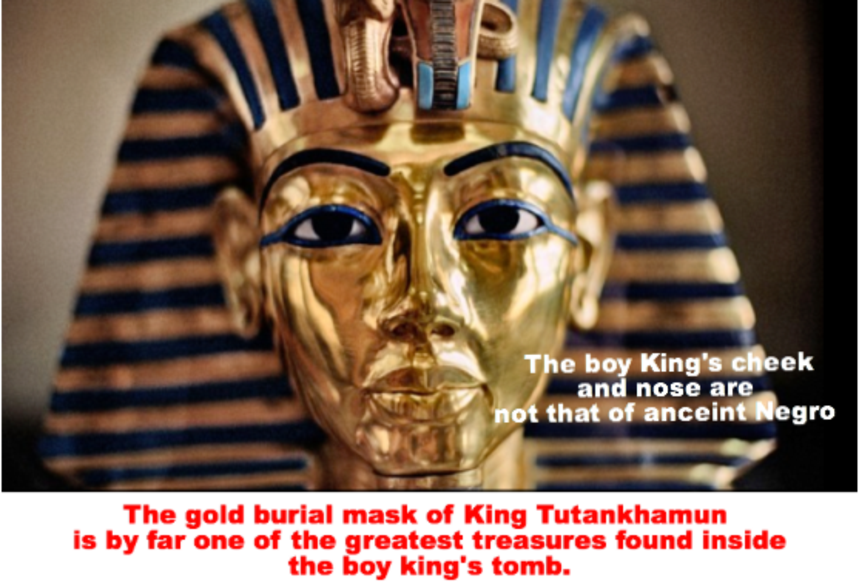 Back to The white Pharaohs 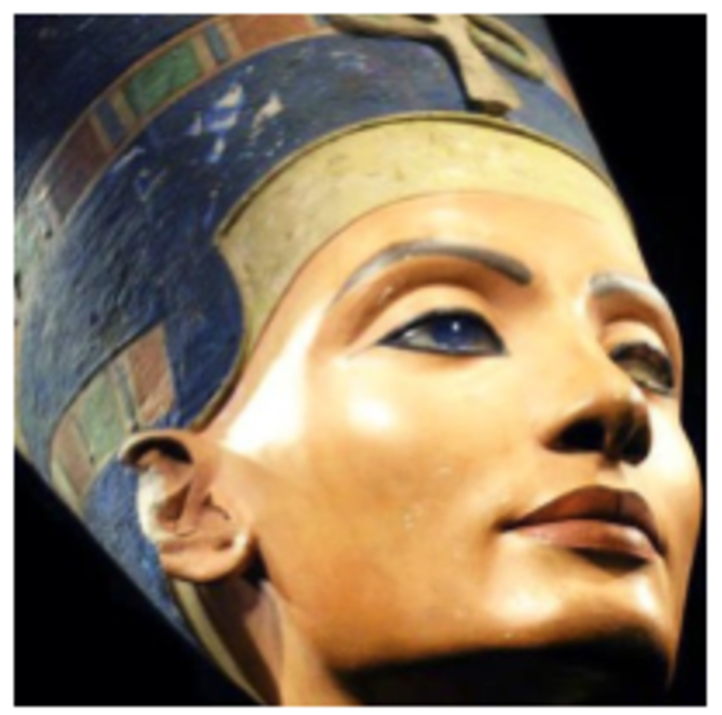 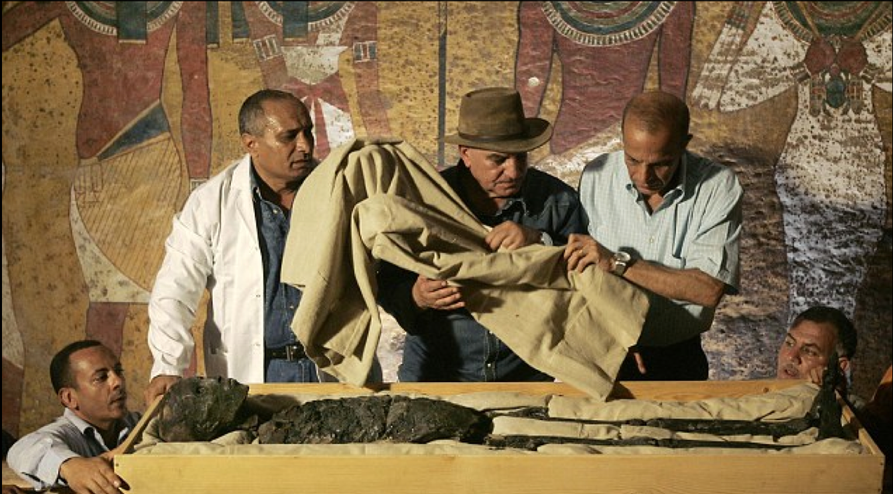 Almost 100 years since its discovery, the tomb of Tutankhamun, the boy-king of ancient Egypt, continues to reveal its secrets. A researcher claims to have found a 'ghost' doorway hiding beneath the plaster on the wall of the burial chamber, which he believes leads to the tomb of the ruler's supposed mother, Queen Nefertiti.

Famed for her exquisite beauty, the grave of Nefertiti or the 'Lady of the Two Lands' has been lost for centuries since her sudden death in 1340 BC.

Neferneferuaten Nefertiti - or Queen Nefertiti - was the wife and 'chief consort' of King Akhenaten, an Eyptian Pharoah during 14th century BC, one of the wealthiest era in Ancient Egypt (bust pictured) 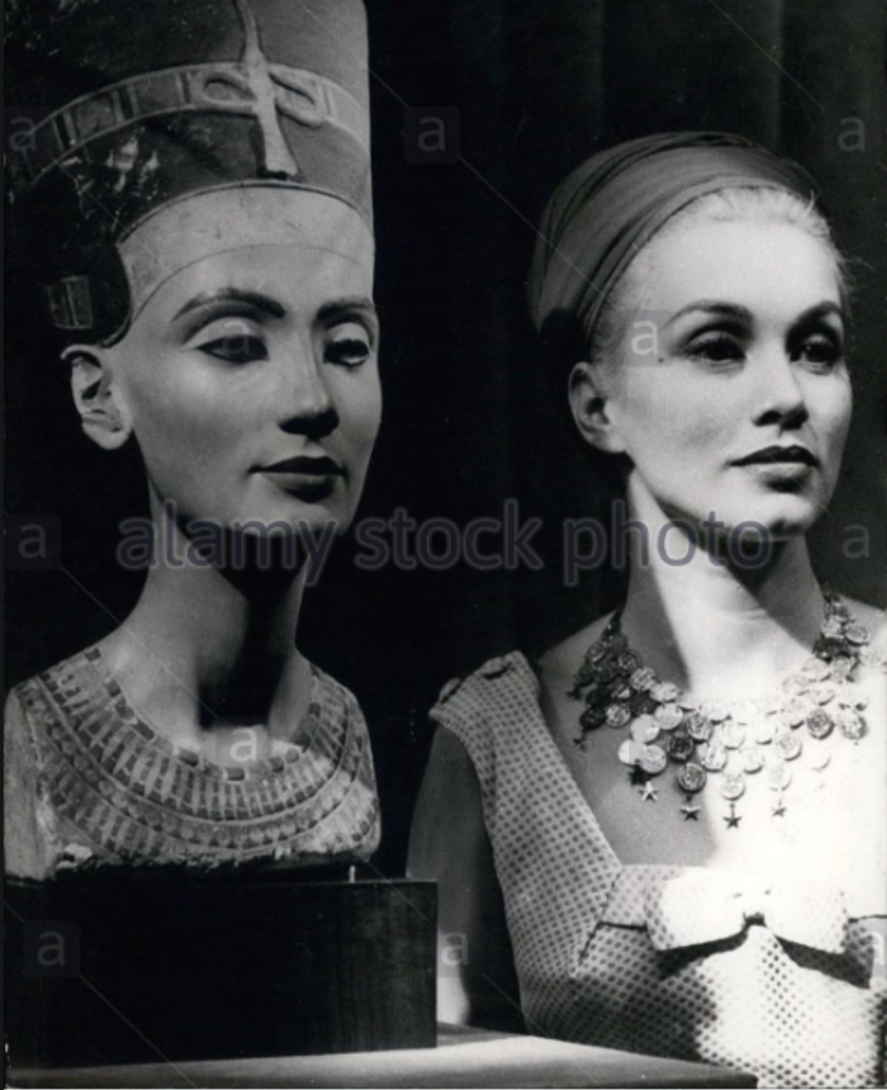 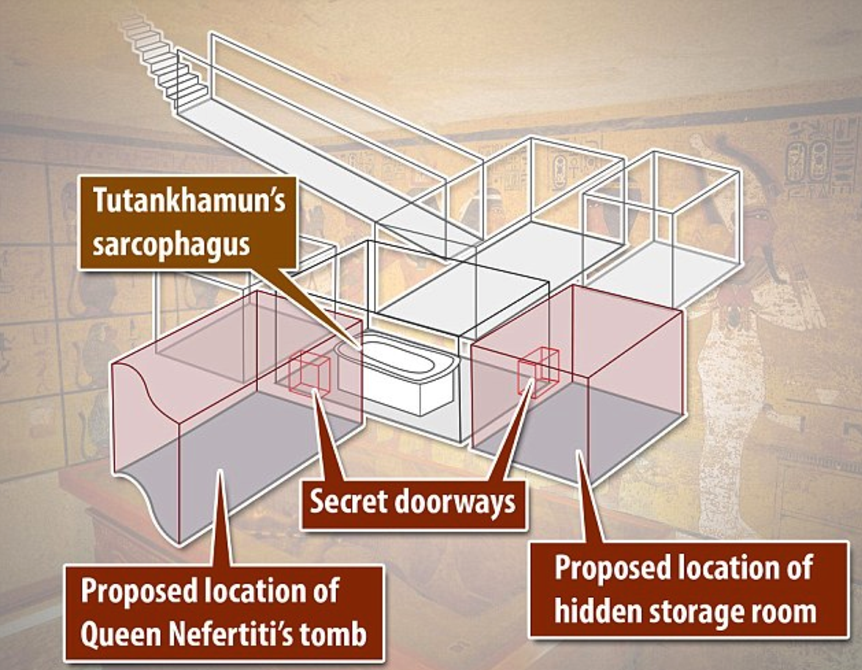