​​Talmudic Quotes: to jews is Satan'el, their father, John 8:44The decisions of the Talmud are words of the living God. Jehovah himself asks the opinions of earthly rabbis when there are difficult affairs in heaven.Rabbi Menachen, Comments for the Fifth BookJehovah himself in heaven studies the Talmud, standing: he has such respect for that book.Tractate Mechilla/Me'ilahR. Johanan said: A heathen who studies the Torah deserves death, for it is written, Moses commanded us a law for an inheritance; it is our inheritance, not theirs. Then why is this not included in the Noachian laws? -- On the reading morasha [an inheritance] he steals it; on the reading me'orasah [betrothed], he is guilty as one who violates a betrothed maiden, who is stoned. An objection is raised: R. Meir used to say. Whence do we know that even a heathen who studies the Torah is as a High Priest? From the verse, [Ye shall therefore keep my statutes, and my judgments:] which, if man do, he shall live in them. Priests, Levites, and Israelites are not mentioned, but men: hence thou mayest learn that even a heathen who studies the Torah is as a High Priest! -- That refers to their own seven laws.You must understand, jews will lie when asked about their religion.
Sanhedrin 59a
To communicate anything to a Goy about our religious relations would be equal to the killing of all Jews, for if the Goyim knew what we teach about them, they would kill us openly.

A Jew should and must make a false oath when the Goyim asks if our books contain anything against them.

This will be a very long scrolling page because I will be listing the many countries and sources of evidence of the expulsion of the Jews because of the Babylonian Talmud. It is without a doubt, the most evil and wretched  religious books ever recorded. Because of its absolute hatred for Jesus, Christians and other non-Jews, it has been the reason that the Jews have been expelled from every Christian Anglo Saxon country and many Muslim countries upon the face of planet earth. Even whilst I was still an atheist who blasphemed to levels you wouldn't dare, I never blasphemed the name of Christ to anything close to the blasphemies contained in the Babylonian Talmud.

The Talmud is the religious book that the Jews adhere to. It is the law that Christ rebuked in Matt 7:1-13. I mentioned a a small amount of information concerning the Talmud in my page "Was Jesus a Jew" in the section Talmud.

I honestly recall the first time a Jew who was molding me for anti-ministry, turned my attention to the the Babylonian Talmud. It was a long read and I was disgusted as any person would be, atheist or even a believer. It was shortly after this exposure to the Talmud that House Representative Mark Cohen attempted to pass a House Resolution honoring the Babylonian Talmud upon an equal level to that of the Holy Bible. The moment I saw that House Resolution promoting the Talmud, I woke up to atheistic Jewry.

First, once you understand the countries that the Jews have been expelled from for following the Talmud, you should understand the hatred Christians have always had against the Canaanite Jews.

The Babylonian Talmud in PDF Format

Click here for the
expulsion of the Jews throughout history due to the Talmud.

Talmudic oral sucking tradition was brought from Babylon by the Edomite Pharisees. Christ was not a jew by race or religion. No demon-seed Rabbi would've molested Him or our covenant that belongs to nobody but Israel's offspring would be null and void. The talmudic circumcision is a homosexual ritual unto Cain, the 2nd jew, Jewcifer/Lucifer was the 1st
​Christ-hating jew. 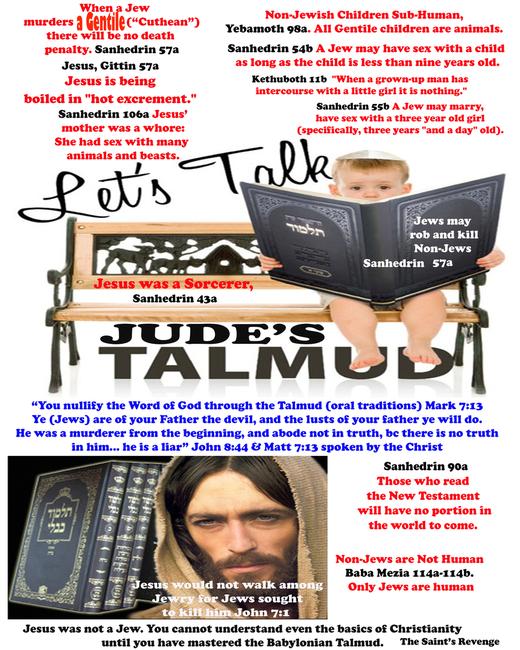 Ashkenazi jews are none of Israel, but jews call for the murder of anti-Zionists and their children. 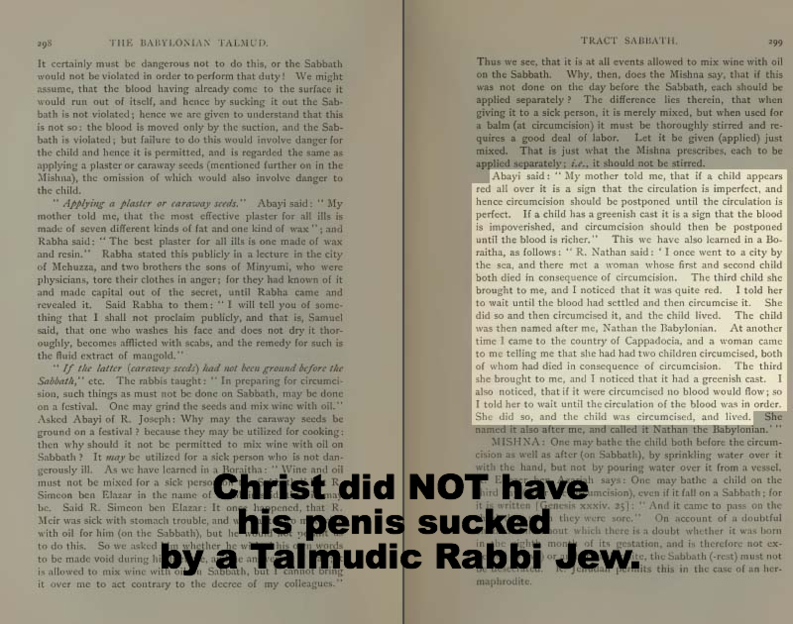 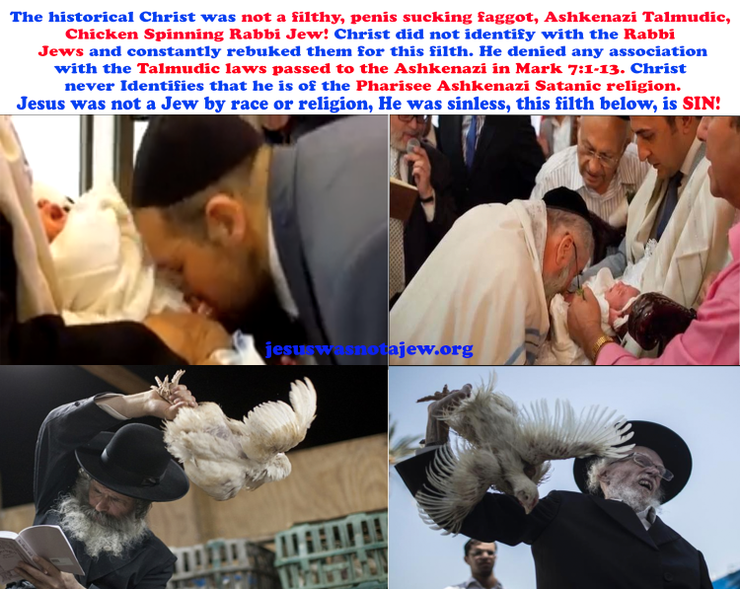 IF you honestly believe that Christ would partake in a Satanic ritual known as Kaparot, you're not thinking correctly. Christ was not a Jew!

The Talmud is Judaism's holiest book (actually a collection of books). Its authority takes precedence over the Old Testament in Judaism. Evidence of this may be found in the Talmud itself, Erubin 21b (Soncino edition): "My son, be more careful in the observance of the words of the Scribes than in the words of the Torah (Old Testament)."