Have you ever met a Christ-hating atheist Jew like the fraudster and liar, David Silverman? He and his ignorant, lying, shabbos goyim atheists robots will attempt to silence Christians by blaming the Spanish inquisition upon the church. The inquisition is as a reason that Christianity should be ended forthwith, they say. They'll cite movies, use fake statistics and quote propaganda books to shame the church. This is all that these atheist jews can do. They lie to gain a position over Christians.  I even did it while I was an atheist-Jew, that's exactly how I was trained at American atheists, Inc. First things first, the so-called "Spanish Inquisition" only lasted 350 years. During this 350 years, a maximum of 5,000 people were killed by the state. This number equates to 14 people a year. These people were not tortured in an "Iron Maiden" spike casket, nor were any people put on torture wheels. These torture devices only exist in the imagination of jews as does the Holocaust. Jews use their influence via a brainwashing agenda against our children. In its brief sixty-minute presentation, "The Myth of the Spanish Inquisition" provides only an overview of the origins and debunking of the myths of torture and genocide.  The documentary definitely succeeds in leaving the viewer hungry to know more. The long-held beliefs of the audience are sufficiently weakened by the testimony of experts and the expose of the making of the myth.

The Inquisition began in 1480.  Spain was beginning a historic reunification of Aragon and Castile. The marriage of Ferdinand of Aragon and Isabella of Castile created a unified Hispania not seen since Roman times. Afraid that laws commanding the exile or conversion of Jews were thwarted by conversos, i.e. synagogue-going "Catholics," Ferdinand and Isabella commissioned an investigation or Inquisition.  They began the Inquisition hoping that religious unity would foster political unity, and other heads of state heralded Spain's labors for the advent of a unified Christendom.  The documentary clearly and boldly narrates the historical context, which intimates that theSpanishwerenot acting odd by their contemporary standards.

The Inquisition Myth, which Spaniards call "The Black Legend," did not arise in 1480. It began almost 100 years later, and exactly one year after the Protestant defeat at the Battle of Muhlberg at the hands of Ferdinand's grandson, the Holy Roman Emperor Charles V.  In 1567 a fierce propaganda campaign began with the publication of a Protestant leaflet penned by a supposed Inquisition victim named Montanus. This character Protestant of course) painted Spaniards as barbarians who ravished women and sodomized young boys. The propagandists soon created "hooded fiends" who tortured their victims in horrible devices like the knife-filled Iron Maiden which never was used in Spain).  The BBC/A&E special plainly states a reason for the war of words: the Protestants fought with words because they could not win on the battlefield.

The Inquisition had a secular character, although the crime was heresy.  Inquisitors did not have to be clerics, but they did have to be lawyers. The investigation was rule-based and carefully kept in check.  And most significantly, historians have declared fraudulent a supposed Inquisition document claiming the genocide of millions of heretics.

What is documented is that 3000 to 5000 people died during the Inquisition's 350-year history.  Also documented are the "Acts of Faith," public sentencings of heretics in town squares.  But the grand myth of thought control by sinister fiends has been debunked by the archival evidence. The inquisitors enjoyed a powerful position in the towns, but it was one constantly jostled by other power brokers.  In the outlying areas, they were understaffed in those days it was nearly impossible for 1 or 2 inquisitors to cover the thousand-mile territory allotted to each team. In the outlying areas no one cared and no one spoke to them.  As the program documents, the 3,000 to 5,000 documented executions of the Inquisition pale in comparison to the 150,000 documented witch burnings elsewhere in Europe over the same centuries.

The approach is purely historical,and, therefore, does not delve into ecclesial issues surrounding religious freedom. But perhaps this is proper.  Because the crime was heresy, the Church is implicated, but the facts show it was a secular event.

One facet of the Black Legend that evaporates under scrutiny in this film is the rumor that Philip II, son of Charles V killed his son Don Carlos on the advisement of the aging blind Grand Inquisitor. But without a shred of evidence, the legend of Don Carlos has been enshrined in a glorious opera by Verdi.

Henry Kamen of the Higher Council for Scientific Research in Barcelona said on camera that researching the Inquisition's archives "demolished the previous image all of us historians) had."

The special may be disturbing to young children.  There are scenes of poor souls burning at the stake and close-ups of the alleged torture devices.  Scenes depicting witches consorting with pot-bellied devils are especially grotesque.  For kids, this is the stuff of nightmares.

Discrediting the Black Legend brings up the sticky subject of revisionism. Re-investigating history is only invalid if it puts an agenda ahead of reality.  The experts once true believers in the Inquisition myth were not out to do a feminist canonization of Isabella or claim that Tomas de Torquemada was a Marxist.  Henry Kamen of the Higher Council for Scientific Research in Barcelona said on camera that researching the Inquisition's archives "demolished the previous image all of us historians) had."

And the future of the Black Legend?  For many it may continue to hold more weight than reality.  There is the emotional appeal against the Church. The dissenters of today may easily imagine Torquemada's beady eyes as a metaphor of the Church's "dictatorial, controlling, damning" pronouncements.  The myth is also the easiest endorsement of the secular state:  "de-faith" the state and de-criminalize heresy. Who will be the revisionists in this case?  Will the many follow Montanas' lead in rewriting history?

Our 20th century crisis of man playing God — usurping power over conception, life, and death — leaves us with no alternative but to qualify our demythologization of the Inquisition with a reminder:  3,000 to 5,000 victims are 3,000 to 5,000 too many. Keep in mind that these people were not killed because of their faith or the lack of faith thereof.  This sectioned article appeared in Crisis Magazine.

David Silverman is a fraudster and a liar on nearly all of his points. However, because jews control the collegiate world, a proper debate will not be allowed. If you are the Christian exposing the crimes of the Jews you're called an "AntiSemite." We here at JWNAJ Ministries know that the Jews are not Semites and that no time in history were 6 million Canaanites killed by Christian Adolf Hitler, that's a shame it didn't happen. The United States has a hell of a Jewish  problem on our hands. We are soon going to have to make war with everyone of these hooked nose jew liars in the short future and send them to the abyss.

The Spanish Inquisition is a Myth!

Watch this video and learn how to refute any atheist jew who blames  this Spanish Inquisition myth upon the church.

Vicious crimes committed in our generation by atheists Jews makes the myth of the Spanish Inquisition seem pale. 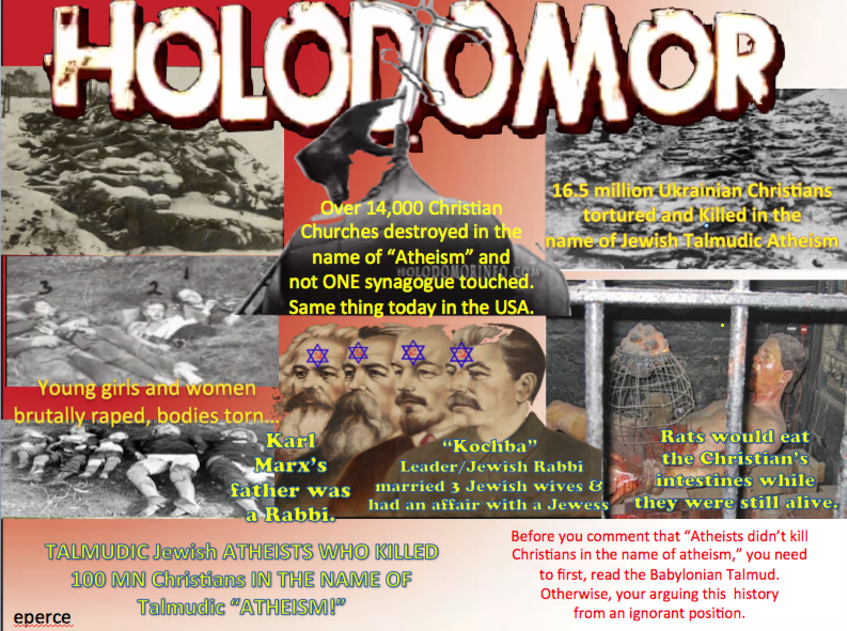 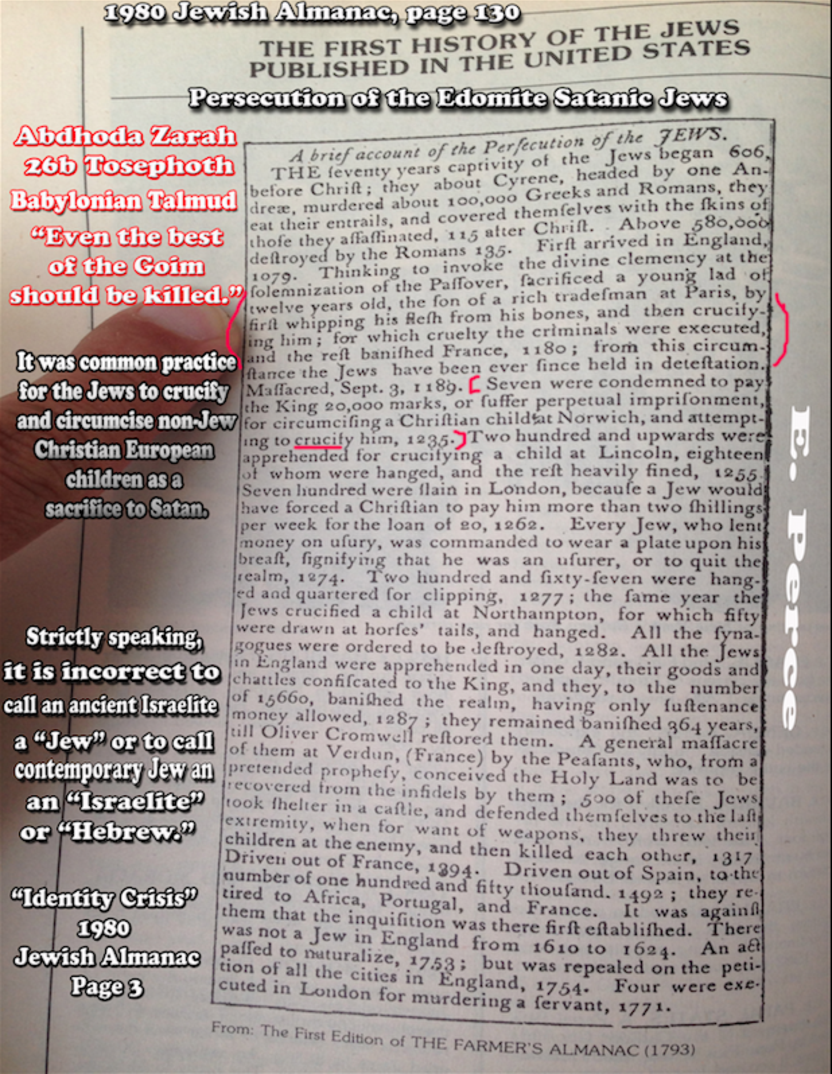 When is the last time this lying Khazarian atheist jew brought up the crimes of Israel? He's such a coward he refuses to mention the penis sucking rabbis who are child molesters. He actually makes excuses condoning their filthy addictions of raping jew devils. 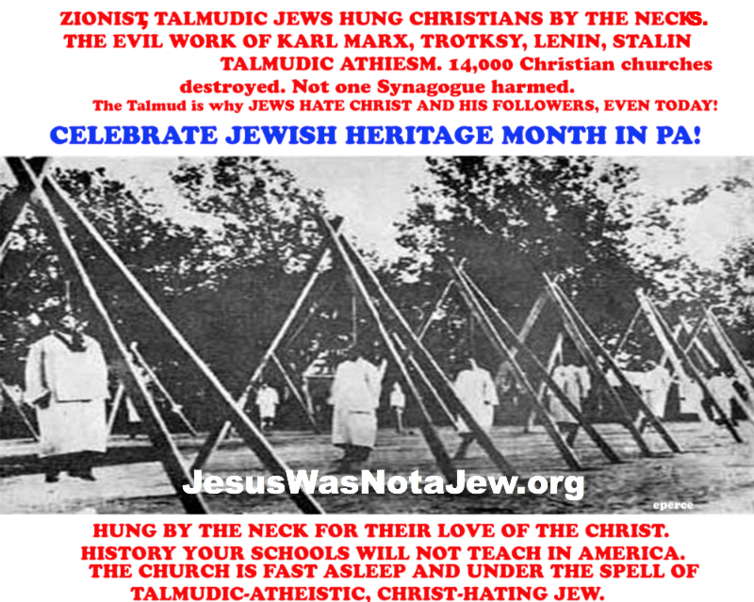